This has been a rather rough couple of weeks. First, my wife’s grandmother was put on hospice, and then passed away. Rather inefficient trying to do research while making funeral arrangements and trying to play peacekeeper amongst my wife’s family.

Second, despite looking all over for newspapers regarding the O.K. Corral shootout so I could gauge reactions to the gunfight, searching through all the historical newspapers databases turned up nothing.

On April 18, 1906, a massive earthquake–measuring about 7.8 on the Richter scale–hit the city of San Francisco. The city, then comprised mainly of Eastern-style brick buildings (which disintegrate into dust in an earthquake), was devastated. Large portions of the city collapsed into rubble, and then to make matters worse, what remained standing was soon consumed by raging fires. Many of the city’s water mains had burst, and in desperation firefighters began dynamiting buildings in an attempt to create a fire break, all to often only spreading the fire they were attempting to contain. By the time the fires were at last extinguished four days later, over 3,000 people were dead, and about 80% of the city of San Francisco, including the entirety of the financial district and city hall, had been destroyed.

The 1906 earthquake left a lasting impression on the development of California. For over 60 years, San Francisco with its enormous natural harbor had been the financial, cultural, and trade hub of the Pacific coast, the “Gateway to the Pacific” through which America extended its economic and military power westward to Asia. After the quake, though San Francisco rebuilt quickly, it was never able to shake (no pun intended) off the memories of 1906. Much of the trade power moved south to coalesce around a small settlement in the southern third of the state named Los Angeles, and much of the military power based in San Francisco redeployed to a small town near the border with Mexico named San Diego.

I wanted to examine the city’s water mains, to see if perhaps there was a pattern between the fire main failures and the city-wide destruction. Remembering my History and Cartography class, I knew there was a source that might have the answer: the Sanborn insurance maps. Sadly, however, Mason does not have access to Sanborn maps of California, but I was able to find a perfect example online: a colored 1899 Sanborn map showing which areas were covered by which water reservoirs. Unfortunately, I could not download it. But I kept it open in a tab, and soon uncovered another version of the same map, this time uncolored.

Luckily for me, my History and Cartography class had introduced me to Adobe Illustrator, and by swapping between Illustrator and the colored map for reference, I was able to recolor the Sanborn map.

Now that I knew where the water mains covered, I quickly found a map showing the destroyed portions of San Francisco. Opening up Illustrator again, I painstakingly overlaid the torched areas (in black) over the map of the fire mains. 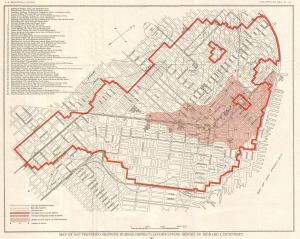 Interestingly, when coloring in the map and noticing the enormous size of some of the water districts, I was expecting the largest district to have suffered most, but this was not the case. Instead, the fire affected most the patchwork of fire districts near the harbor. I wonder if perhaps the small size and patchwork nature of these districts contributed to their destruction: maybe such a layout made these districts dependent on a small number of water mains, and when these burst they were left helpless, as opposed to the larger districts which presumably have more water mains and when one burst they could redirect water from other parts of the district. In any case, a goal for future research!